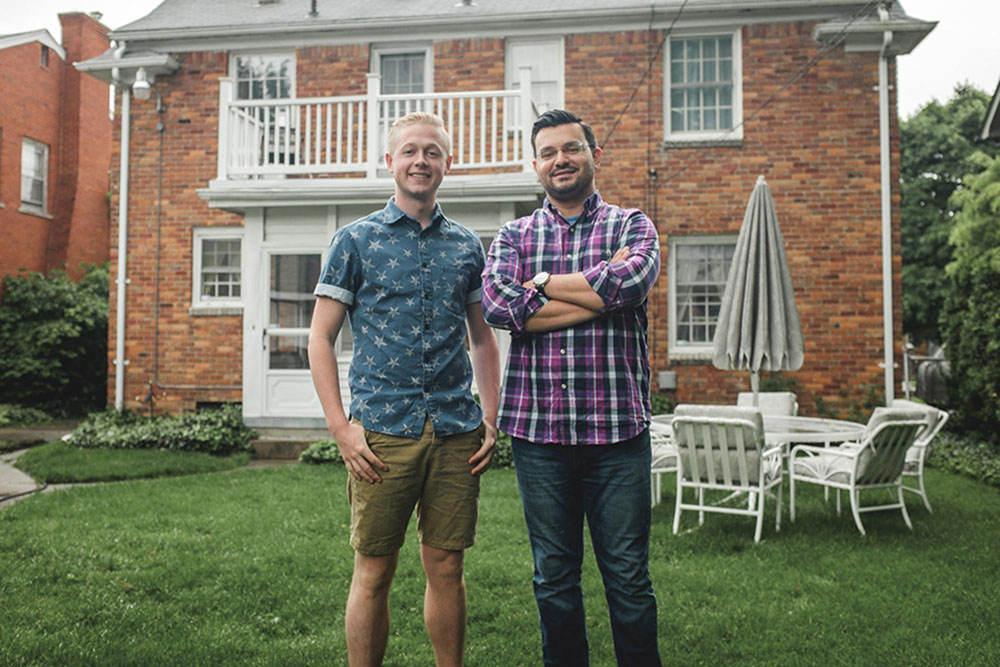 After months of searching, sleeping on the floor and some initial fears, partners live happily ever after

Partners Chris Krupa, 30, and David Utley, 21, are living a life that some people their age can only dream of achieving. Millennials have been accused of everything from killing malls to killing napkins, but Krupa and Utley seem to have forgone the compulsory millennial indulgence of avocado toast in favor of getting the dream house with the dog and white picket fence.

Krupa and Utley relocated to Detroit from Rochester two years into their relationship. They’re both planning to go into health professions, and they’d been looking for a new home in the city for quite some time.

They initially intended to rent downtown, but couldn’t find anything in their budget. Next, they decided that they wanted to buy a “cute fixer-upper,” and actively started looking in February of 2016. Their search led them through the University District, Bagley, Green Acres, Indian Village and East English Village to no avail. Eventually in May of 2016, the couple heard about a house through the North Rosedale Park Open House, run by Marsha Bruhn and the neighborhood association.

Krupa was the first one to see the house on Shaftsbury Street. He walked through it three times before Utley came to see it. “I just fell in love, and kept spinning around and around and around,” he said. An hour later, they made an offer and shortly thereafter the house was theirs for $85,000 – about $20,000 below the home’s Zillow estimate and neighborhood property value average, they note. In 2016, they were two of only 16 people who purchased their home through the Detroit Home Mortgage Program, an initiative designed to help first-time homebuyers in the city.

If this isn’t a Cinderella story, I don’t know what is.

Like many millennials, Krupa and Utley were staying at Krupa’s parents’ house for a year and a half — “on the floor” as Krupa recalls it — when they got the break they’d been waiting for.

The previous owner (and maybe part-time fairy godmother?) was a woman named Marilyn Matz, and her house was the first house on that block when it was built in 1931. Her father — an attorney and graduate of the University of Michigan — had the house commissioned, and the home originally had a double lot beside it, complete with a family farm. The lot and farm were sold off, and other midcentury houses appeared in their wake.

As Krupa and Utley tell it, Marilyn — whom they refer to with the same loving affection as one would a grandmother — never married and never had any children. They reference her by her first name, and you can tell that this is a woman who has had a huge impact on their lives. “We really love Marilyn, by the way,” Krupa said. “She’s like our adopted grandmother.”

Some of her furniture was also given to them, and the pieces are mixed into the decor that Krupa and Utley brought themselves. Everything fits together so well that an onlooker wouldn’t be able to tell which pieces were original to the house and which ones were imported.

“I always thought that these two young, gay, white boys from the suburbs would just be ... I don’t know. There was just a little fear that we just wouldn’t quite fit in.”

When Krupa and Utley took me on a tour through their new home, one thing that became clear was their love of art. Their walls in the sitting room, dining room and hallway are decorated with tastefully framed paintings. My favorite piece was a standalone sculpture titled “Baby Seal.” But the baby seal isn’t actually a baby seal: it’s a giant phallus with two tiny flippers in the front. When I pointed that out, we laughed. “I’m pretty sure somebody just wanted to make a penis, and then couldn’t call it that,” Utley admitted.

When the couple bought the sculpture, Krupa remembers thinking that it would make “a great conversation piece.” He was correct. It was the first thing that caught my eye when I walked into the sitting room, and I’d been racking my brain for the first few minutes of our interview trying to figure out a way to talk about it.

If you thought this story couldn’t get any more quaint than it already is, think again. The day Krupa and Utley moved in, they raked leaves in their front lawn and remember neighbors trickling down the street at first cautiously, and then at a much quicker pace “surrounding us and asking ‘Where are you from?’ ” recalled Utley, adding that the community, “really welcomed us in here.”

It was what they were looking for, an “old neighborhood like you see in the movies where everyone’s established, everyone looks out for each other, you can borrow a cup of sugar through the side window,” Krupa said. Unsurprisingly, they actually have borrowed a cup of sugar and some dried basil from a neighbor. At this point, I’m convinced that the couple is living in a Cinderella and Norman Rockwell mashup, and I imagine that tiny bluebirds and other woodland creatures emerge cheerily from the 11 rose bushes in their backyard to do household chores and break into chorus on a regular basis.

“I always thought that these two young, gay, white boys from the suburbs would just be ... I don’t know. There was just a little fear that we just wouldn’t quite fit in,” Krupa told me, but assures me that they “never felt unsafe.” The neighborhood has been wholly supportive, and the couple mentions that there are a few older LGBT couples who also live in the area.

Before I left, I asked them how they felt knowing that this was now their home. Krupa was about to answer in the affirmative until Utley said he was “terrified.”

“I was a 20-year-old purchasing a house and, you know, I was just...I don’t know. I don’t know very many 20-year-olds who have gone through getting a mortgage.”

That’s certainly a dose of reality. Cheers to Krupa and Utley, and here’s to their fairytale home never, ever reverting to a pumpkin.